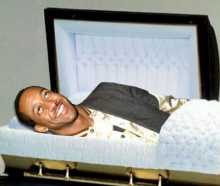 I have been punk’d several times when I search for obscure stars on Wikipedia and see that they have—died? I searched for Jaleel White a couple of weeks ago to see what he had done after playing Urkel on Family Matters only to find out that he had been killed in a shootout at a club in 2011. After searching for an obituary for White—I don’t trust Wikipedia completely, although I fear that many do--I found out that he was still alive. In fact, he had been pronounced dead several times on the Internet—his 2006 suicide was a popular email—although he is alive and well.

The reported deaths of big celebrities is a longstanding tradition, dating back to the beginning of the concept of celebrity. But those reports are more easily disputed. Managers could instantly find the reports and proclaim their falseness, the celebrity in question could appear on television to clear things up. Even today, death hoaxes of big celebrities are often righted instantly by Twitter and elsewhere.

But small-scale or has-been actors’ deaths are another breed altogether. Changes can be made on Wikipedia pages—the most common source, it seems, for rumors like these—and these celebrities don’t visit them for weeks or months. They may not have active agents or publicists checking up on their publicity anymore. They may have moved onto lives outside of the limelight entirely.

The strangest part about the minor celebrity hoaxes are the people behind them. What motivation do they have? More often than not, the death accounts are completely fabricated with no shred or truth—let alone no apparent motivation  of a modern television show—spurring the trickster to alter the Wikipedia page or the like. It doesn’t seem to be malicious—how could you hate Steve Urkel?—but instead seems to be motivated by seeing how far the rumors can and do go.

Other times, however, misinformation can lead to celebrity death hoaxes. Take for example the case of James Avery, the actor who played Uncle Phil on The Fresh Prince of Bel-Air. His death was widely broadcast on the Internet because an actual James Avery—a Scottish soccer star nicknamed “Uncle Phil”—really did pass away. A simple case of mistaken identity.

These cases of Internet trickery are nothing new, of course. We are used to looking for scams, fretting about providing our credit card numbers, distrusting Internet accounts. Perhaps these celebrity death hoaxes are a little transparent, however, because their motive is much more elusive.